Jesse Sublett, the Musician, and the Skunks 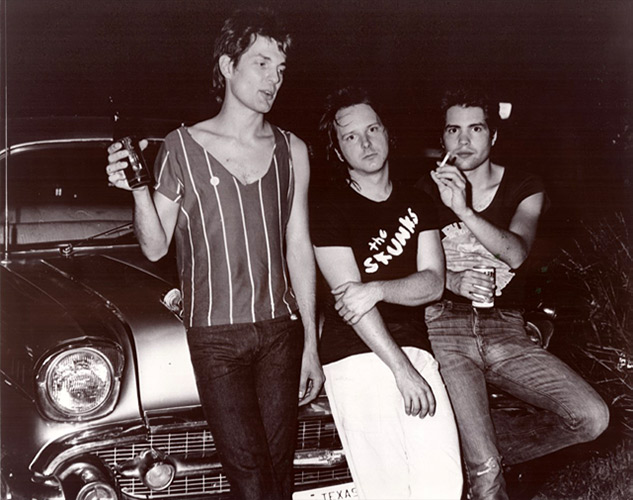 Learn much more about the history of the Austin music scene and Jesse Sublett’s role in it, from the glam rock era through the beginning of the punk scene in “Austin Punk Chronicles,” an ongoing series published by the Austin Chronicle. Jesse’s story begins at the end of Chapter 2, Part 1, which documents  1970s Austin glam rock scene. Jesse was a founding member of the band Jelly Roll, and The Skunks rose from the embers of that band in late 1977. Each installment of Austin Punk Chronicles is richly illustrated.

Jesse, along with Skunks guitarist Eddie Muñoz, also make frequent appearances in the book All I Ever Wanted, the critically acclaimed memoir by Go-Go’s bass player Kathy Valentine. Jesse and Kathy played together in Austin’s first punk band, the Violators, and joined forces again in the band World’s Cutest Killers, from 1987-1989.

THE SKUNKS were founded in Austin, Texas, near the end of 1977. Their first gigs were in January and February 1978.

The Skunks helped put Austin on the rock n’ roll map, as Margaret Moser wrote in her liner notes for the band’s live CD compilation, EARTHQUAKE SHAKE: LIVE, released in 2001.

“On a cold and otherwise unremarkable Austin night in February 1978, something happened in a campus-area club called Raul’s. The first punk show was scheduled, featuring the debut of a band called The Skunks.

Bassist and lead singer Jesse Sublett was handsome and erudite, brimming with piss and vinegar. His vision of the band as an apolitical garage-rock trio manifested during the punk explosion. Its attitude and energy fueled his desire to make rock n’ roll that mattered, a dream that came true at Raul’s: The Skunks, quite literally, helped put the cosmic cowboy kingdom of Austin on the rock & roll map.

That evening was a turning point in Austin’s musical history. Dozens of bands came in The Skunks’ wake. The sounds and scenes shifted from punk to New Wave to hardcore to cow punk and back but always The Skunks blasted away with unrestrained defiance. They were the premiere recording and touring band of the first wave of Raul’s bands and their music still pulses with the lifeblood of that era. The authentic sound and skull-rattling vibrancy of their music, however, was never successfully documented on vinyl, however, making the recent discovery of two dusty cassettes (one in Sublett’s closet, the other in that of friend, photographer and long-time fan, Glenn Chase) a chance to address that gap in the band’s permanent legacy for posterity and, not inconsequentially, in a digital format.

The Skunks’ classic lineup was well in place by the time these Back Room and Max’s Kansas City shows were recorded. Sublett and original Skunks drummer Billy Blackmon hit a groove when guitarist Jon Dee Graham joined in early 1979, evident in every track. Its 15 potent songs of love, angst, and other matters of the young heart form a gloriously exuberant soundtrack from the days when rock ‘n roll could save the world with three chords and a lotta volume.

As Sublett recalls, The Skunks became a band on a whim, because near the end of 1977, he and guitarist/BFF Eddie Muñoz had nothing else going on:

Eddie Munoz and I were talking, we had no gigs, our band (Jelly Roll), had fallen apart over the summer. I was playing in an all-girls-but-me-band called The Violators (Kathy Valentine, guitar; Carla Olson, guitar; Marilyn Dean, drums; and me, Jesse Sublett, on bass. Carla, Kathy and I all shared vocal duties). When the Violators scored a booking at a Tejano bar on the Drag called Raul’s, we were all excited, as there were no other punk bands in Austin at the time. The booking was slated for early January 1978. We played our first gig right after the Sex Pistols show in San Antonio, opening for a local band called Project Terror, and it was a howling success. We got another booking for January 27.

Previously, we had played mini-set on New Year’s Eve, December 31, 1977, opening for Uranium Savages at Soap Creek Saloon. The Savages had a large, passionate following, and it’s safe to say that live wire, super caffeinated punk rock ‘n’ roll was not what they had shelled out their admission for. Mid-way through the opening set by The Tools, a band fronted by the Savages sound tech, Charles Ray, with Eddie, Bill and myself filling in as the backing band, The Skunks and The Violators took over the stage for a six-song mini set, 99 miles an hour, 125 decibels–and the vast majority of long-haired, bell-bottomed, peasant blouse crowd really hated our guts, expressing their dismay with curses, hog calls, and flying objects. Margaret Moser was there, however, and she loved us, Violators and Skunks both. Also present was my future girlfriend/wife, Lois Richwine. She loved us, too. She was ahead of the times.

In January, just nine days after the Sex Pistols played San Antonio, The Violators played to a tinder box crowd at Raul’s. Next one was a double bill with The Skunks. This was the explosive beginning of the Austin punk scene.

Dozens of bands formed after that first show at Raul’s. During the following weeks and months, the scene evolved so rapidly and expansively that by April, The Skunks were in the studio recording an album, and by September, a new band, The Huns, had positioned themselves as The Big New Thing, howling that the Skunks were old and boring, “like The Rolling Stones.” Which, I don’t know, sounded like a compliment? The Huns even did parodies of my best songs. “Something About You Scares Me” became “Something About You Bores Me,” and there was a profanity-laced revision of a couple of my other songs, too. Kathy and Carla moved to LA where they formed the Textones. Later, Kathy joined the Go-Go’s. Carla went solo in 1989 and has enjoyed a successful career as a songwriter and producer.

At the end of 1978, Eddie Munoz moved to LA where he joined a great new band The Plimsouls. Eddie’s replacement in The Skunks, Jon Dee Graham, joined the band. The kept evolving, becoming more more popular. Every couple of years ago, we do a reunion show, so if you’re an old fan or just curious, stay tuned, or check out some of the video clips on YouTube – but make sure you’ve got the right band. Remember, The Skunks have always been–and always will be—a power trio.

Why a trio? Primarily because when they started the band, they couldn’t think of anyone they wanted as a lead singer. At first Eddie sang most of the songs, but Jesse branched out from the handful of Velvet Underground songs he knew and began writing more and more original tunes and increasingly enjoying it, and that created a gravitational force that determined the band’s future direction.

To get an idea of what the band was like around 1979-1980, check out The Skunks CD release, The Skunks: Earthquake Shake: Live, on iTunes. The recordings were made during one night at Max’s Kansas City in NYC and a second night at the legendary dive The Back Room, both in 1980.

A nice capsule history of The Skunks in the Austin Chronicle from 2000, “Young, Loud & Cheap,” published upon the release of  Earthquake Shake Live.

Maybe you were actually there to see the Skunks at Raul’s. Maybe you weren’t hitting the local clubs then, but remember hearing their songs “Cheap Girl,” “Earthquake Shake,” and others in rotation on KLBJ-FM in the early Eighties. Maybe you’re only familiar with their work through the Sons of Hercules’ perennial cover of “Gimme Some.” Or maybe you’re just hearing the Skunks for the first time now, via the live performances at Max’s Kansas City in New York and Austin’s Back Room on the just-released Earthquake Shake: Live. Whatever the case may be, chances are if you like loud music and live in Austin, you’ve been influenced, at least in some small way, by the Skunks.
Formed in 1977 and disbanded after enough lineup changes to render the local trio all but unrecognizable to its earliest fans in early 1983, Austin’s Skunks managed to straddle the then-important punk/New Wave fence without calling themselves one or the other. Talking to former band members today, genre classifications like punk or New Wave rarely get mentioned. Instead, they favor the simple adjective “loud.” And anyhow, in 1978, the Skunks didn’t have to explain themselves.

Read the rest of the article here.

When you look up The Skunks on Wikipedia, you get the right band–that is, The Skunks from Austin, Texas. There’s also a ska band from Washington, D.C., and a band from Germany, and at least a couple more from elsewhere in the USA.

“Earthquake Shake”/”Can’t Get Loose” was re-released in a facsimile edition by Last Laugh Records in 2012.

Check out THE SKUNKS 2000 CD release, EARTHQUAKE SHAKE: LIVE, on on iTunes.